Both men and women took to Twitter on Tuesday night to respond to accusations against Nation of Islam leader Minister Louis Farrakhan and women who back him.

The Twitter chat was designed and moderated by Ebony Muhammad, a member of the Nation of Islam and publisher of Hurt 2 Healing Magazine. She has done similar chats in the past when Minister Farrakhan was faced with accusations.

Muhammad felt it was necessary to organize a chat because the positive impact Minister Farrakhan had on her life and the lives of others needed defending.

“What we are setting out to accomplish, what we are participating in tonight isn’t even a drop in the ocean compared to the decades of defence the Honorable Minister Louis Farrakhan has done on our behalf,” Ebony Muhammad said. “Before many of us were even in our mother’s womb, the Honorable Minister Louis Farrakhan was preserving a space for us to learn the Truth of who we are, Who God is and who our open enemy is. Tonight, like any moment we step into social media to tweet his words, videos and defend him, is an act of ongoing gratitude. We must get on the witness stand and give our testimonies!”

The Twitter chat came on the heels of a slew of accusations from media professionals and Jewish leaders following Minister Farrakhan’s Feb. 25 Saviours’ Day address. Most prominently, Jake Tapper, an anchor for CNN’s The lead, took to Twitter to point out what he considered to be anti-Semitic quotes by Minister Farrakhan.

Minister Louis Farrakhan engaged in a series of anti-Semitic remarks on Sunday.

He also called out Tamika Mallory and Linda Sarsour, activists and organizers for the Women’s March, for standing with Minister Farrakhan.

This is another good question when it comes to @WomensMarch leaders @TamikaDMallory/@lsarsour support for Farrakhan — in addition to his anti-Semitism he espouses misogynistic and anti-LGBTQ views.

In response, the Final Call Newspaper, which is owned and ran by the Nation of Islam, published an article in its latest issue titled “Farrakhan’s defenders challenge Jewish lies.” 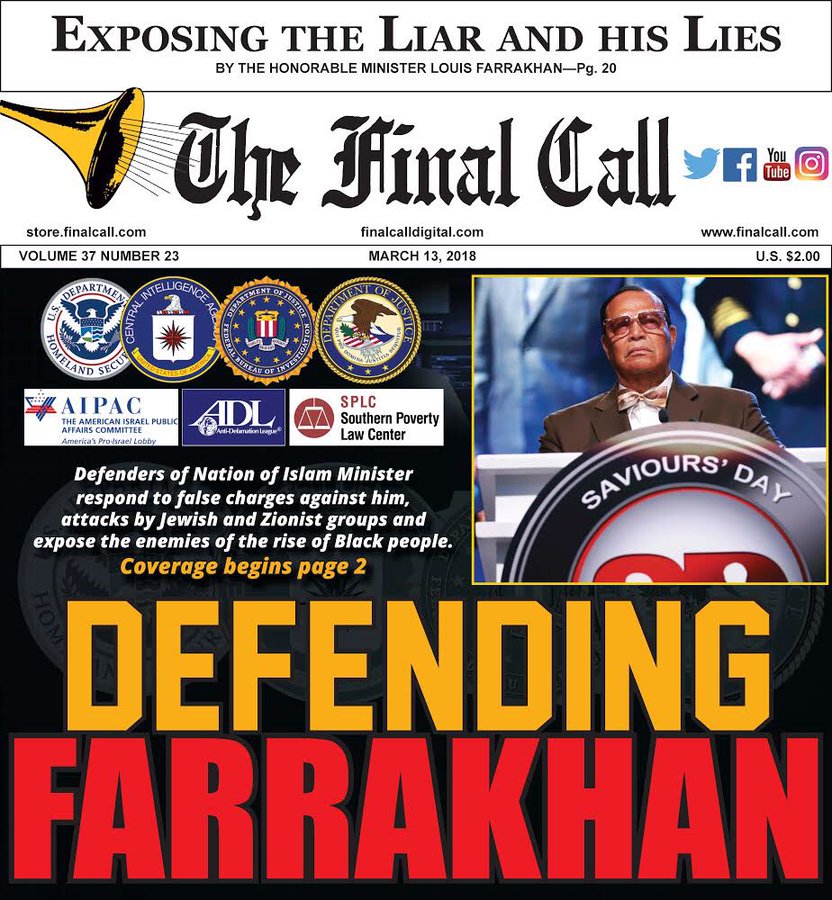 ::New Edition:: DEFENDING FARRAKHAN—Defenders of Nation Of Islam Minister respond to false charges against him, attacks by Jewish & Zionist groups and expose enemies of the rise of Black people. http://FinalCallDigital.com  #Farrakhan

The article offers an argument about why Jews continue to attack Minister Farrakhan, the success Minister Farrakhan has had despite the attacks from his critics and remarks he made during his Saviours’ Day address that many publications are not paying attention to.

On top of that, mostly women of the Nation of Islam further defended Minister Farrakhan through Twitter.

The first question posed during the Twitter chat was:

Q1: For decades the Honorable Minister @LouisFarrakhan has been labeled “anti-Semitic”. Why is this a false claim? What is Semitic, and who are the real/original Semitic people? #Farrakhan #CoveredGirl

A1: The Original people of the area of the world considered home of the Semetic languages such as Arabic, Hebrew, Aramaic, etc. are Black people, not Caucasian. Black / Original people are Semites. #Farrakhan #CoveredGirl

The next question regarded the nature of Minister Farrakhan being called a hater and a racist.

We cant be racist. To be racist is to have collective control and power on a plethora of levels that oppress others solely based on their race. In order for black people to do this, we would need to reverse 400+ years of oppression and you cannot do that. #CoveredGirl #Farrakhan

A2 Nah. If he taught hate then his followers would reflect that. The MGT & FOI are some of the most peaceful/civilized people. What he does teach is TRUTH. And the truth about most people is UGLY and they can’t take it. Not his fault.

Participants of the Twitter chat showered love on Tamika Mallory, Erykah Badu and strong Black women in general who are unafraid to stand with Minister Farrakhan.

A3: We love and support our sisters @TamikaDMallory and @fatbellybella We are here for you, continue to love #Farrakhan and be fearless against those who oppose you. WE got your back#Farrakhan #CoveredGirl

Aqueelah Arbyummi from Washington, D.C. told the sisters she stands with them in truth.

Other issues the Twitter chat tackled include homophobia, the LGBTQ community, and the controversy over Malcolm X.

Q5: Regarding Malcolm X: The Honorable Minister @LouisFarrakhan has been accused of being responsible for his assassination. Is he? Why does this topic continue to come up? What is the motive for such accusations? #Farrakhan #CoveredGirl

Farrakhan called me a Star.@_ohmyAllah

1. When a lie is repeated often enough, ppl start to believe it as the Truth just by sheer repetition. Malcolm X was assassinated by the same poeple who killed MLK. There is no proof that #Farrakhan is responsible for his assassination. #CoveredGirl

The final question of the night asked participants if they experienced misogyny by the Honorable Minister Louis Farrakhan.

Q6: The issue of misogyny has come up, again. Sisters, do you feel oppressed, disrespected, hatred or any form of prejudice from the Honorable Minister @LouisFarrakhan? Please let everyone know what the Minister has done for you as a woman! #Farrakhan #CoveredGirl

Q6: The issue of misogyny has come up, again. Sisters, do you feel oppressed, disrespected, hatred or any form of prejudice from the Honorable Minister @LouisFarrakhan? Please let everyone know what the Minister has done for you as a woman! #Farrakhan #CoveredGirl

A6. I don’t feel oppressed. I feel alive and strong and I know if I continue to stand with #Farrakhan I can weather any storms that come my way. Do you all think the women around Jesus had on mini skirts and their breasts out? #Farrakhan #CoveredGirl

Fudia Muhammad from Austin, Texas also expressed her joy in being a #CoveredGirl.

A6: The Honorable Minister @LouisFarrakhan has freed me to be the woman of God that I always believed I was. He has given my life purpose. Nothing compares to walking this earth with the true knowledge of God; free from fear. I owe that to our Minister! #Farrakhan #CoveredGirl https://twitter.com/EbonySafiyyah/status/971211171008319488 …

She tweeted about her family life as a woman in the Nation of Islam.

A6: I have been married to a wonderful, respectful, hardworking Black man for 21 years who knows that his wife is the woman of God, not the woman of man. He elevates me, honors me, protects me and loves me! He was taught and trained by @LouisFarrakhan!!! #Farrakhan #CoveredGirl

Open Letter from Executive Council of the Nation of Islam to Reps. Danny Davis, Gregory Meeks and Barbara Lee

MONARCH: The Space Between Creativity and Vulnerability

The Evolution of MONARCH

YouTube Terminated My Channel, So I Launched AQM Vidio

The Nation of Islam Official Statement on U.S. Capitol Assault

The Covid-19 Vaccine and the U.S. policy of depopulation